I was impressed by the Steier Group’s flexibility. We strive to live stewardship as a way of life across our diocese, and so we knew that we needed a firm that could modify their approach to fit our specific needs. From conversations with colleagues across the country I know that this is not always the case. The Steier Group listened to what we wanted and delivered an outside-the-box plan that worked for us.

Director of Development and Planned Giving for Catholic Diocese of Wichita, Kan. Ultimately, your decision on campaign counsel will have a significant impact on your ability to reach your campaign goals, both financial and non-monetary. The Steier Group separated themselves from the other firms in the quality of the individuals who serve as consultants for the company. Their Catholicity, professionalism and work ethic have translated into success for our diocese, and I would recommend that you consider them for your fundraising needs.

Former Bishop of the Diocese of Sioux City 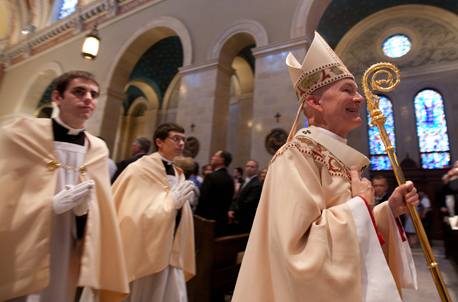 After a great deal of planning, the Archdiocese of Omaha decided to embark on a capital campaign to strengthen our schools and parishes. As we considered various professional firms to help us with the campaign, we concluded that the Steier Group was best positioned to help us run a successful campaign. We are pleased with the work of the Steier Group, and I am proud to share that we are well on our way to achieving our campaign goals. The Steier Group has shown the experience and the ability to rally our priests and parishioners toward a common goal. They are helping us to ignite the faith of our Catholic community.

Archbishop for the Archdiocese of Omaha in Nebraska Based on our feasibility study, other firms would have recommended we proceed with a typical all-parish capital campaign. The Steier Group did not. Instead, they guided us through a year-long process that took a hard look at our plans aimed at building greater ownership among our clergy and lay leaders. This was wise counsel for us. As a result, I believe, we are now positioned for success that we would not otherwise have had.

Archdiocese of Kansas City in Kansas The caliber of their people professionally and personally set the tone for a quality project. I have great confidence in recommending this firm to my fellow clergy and their staffs.

Apostolic Administrator of the Archdiocese of Portland in Oregon Their campaign plan was not something canned and inflexible – it was a personal and collaborative effort that engaged our pastors and our parishioners and proved extremely successful.

Director, Stewardship and Development Office of the Archdiocese of Omaha, Nebraska Early on, our diocese recognized that our previous campaign, while successful in securing funds, created some tensions. It overwhelmed pastors and parish staff and many people who were financially supportive had unfavorable experiences. It was important to me to find fundraising consultants that could not only raise money, but who would help us heal these wounds and unite the Catholics in our diocese. We found that firm in the Steier Group. We received overwhelmingly positive feedback from pastors about the Steier Group. The Steier Group approach was embraced by the people in our diocese and proved to be extremely effective.

Director of Stewardship and Development for the Diocese of Winona, Minnesota Early in my priesthood I said to myself, “I will never do a capital campaign.” Fundraising was the last thing I would ever want to do as a priest. … it’s still not high on my list, but when your parish “blows up” to over 1,600 families in the first year of your parish’s existence, you increase to four packed Masses every weekend, and the elementary school you thought would suffice for a few years would need to double in size to meet your space requirements – you start thinking, “Maybe I’ll have to raise funds.” Thankfully, I had the campaign manager and, with him, the whole Steier Group in my corner. “The Steier Group produced and handled every aspect of the campaign, including the production of campaign materials, grant writing and creation of our campaign website. Our campaign manager helped execute a well-thought out plan, worked closely with the campaign volunteers and kept us on track throughout the process. A comprehensive communications plan was developed and materials created to communicate with our parishioners. All were thorough and well done.”

Pastor of Our Lady of Loreto in Foxfield, Colorado “We retained the services of the Steier Group to help implement a “combined campaign,” one that would meet our obligations to the Archdiocese while also garnering support for our parish’s ambitious projects. Steier’s campaign team tailored their approach, focusing first on a comprehensive communications and cultivation phase. That was followed by a thorough solicitation approach to all parish and school families.” The Steier Group adapted and customized a campaign plan that was specific to our parish. The plan took into consideration our small town approach and close-knit community. Our campaign manager listened to our needs and our initial questions were met with a sincerity I don’t think we could find with another firm.

I could not be more pleased with the work that we have accomplished. Throughout the planning study and the campaign, the campaign manager and client services director were respectful of the culture of St. Austin’s urban location near the University of Texas and the unique challenges and opportunities that posed, and their approach was specifically tailored to meet our needs.

Director of Development and Communications for St. Austin Catholic Parish in Austin, Texas At the recommendation of the diocese, we interviewed a number of professional firms. We ended up selecting the Steier Group to run our feasibility and capital campaign – and it was the best decision we ever made. We truly believe our campaign was such a success because of how the Steier Group was able to organize us into a single, coherent team. Everything went more smoothly than I ever could have imagined. We raised far more money with the Steier Group than we ever could have on our own, and more than that, our volunteers actually had fun! The Steier Group has wonderful support staff who works extremely well with the on-site consultant. The art and graphics department is exceptional. Our appeal was successful because of the very high energy of the Steier team. Their enthusiasm and hard work inspired us.

Pastor of Saint Catherine of Siena in Wichita, Kan. The Steier Group provided the blueprint for a campaign that has defied economic obstacles, overcome volunteer fatigue and set a course for success. The depth and breadth of your services were key to us in achieving such a stellar response. Your firm provided on-site consultation, volunteer training, copywriting, wealth management consultation, graphic design support, grant and foundation advice, and most importantly a host of professionals who responded to our every need.

Former Development Director of Our Lady of the Lake Parish in Lake Oswego, Ore. I admit I was one of the biggest skeptics. When my parish first started discussing the need for a capital campaign, I was against hiring a consultant. I advocated that we should run the campaign ourselves. Well, my misgivings quickly changed. Having served as general chair of the campaign, I can tell you that the Steier Group impressed me with every aspect. This group is not your standard fare of consultants – the kind who like to offer advice on how to do things and then leave town. Instead, the Steier Group provided a full-time campaign manager who worked tirelessly to provide a detailed, compelling and successful campaign for our parish.

Campaign chair for Church of the Magdalen in Wichita, Kan. The Steier Group provided us with a thorough approach to fundraising and public relations. They helped us reach out to community and civic organizations, local businesses, foundations and private citizens for financial support. They produced informative and eye-catching communication pieces such as a case statement, campaign video and fact sheets to inform and educate prospects about Kidzeum. They also used their communications expertise to help us gain attention of the local media and public officials.

Board President of Kidzeum of Health and Science in Springfield, Illinois When we began our campaign, we had a full development staff and believed the bulk of the campaign work could be done internally. We felt we did not need the day-to-day project management that Steier provides. However, after struggling to meet deadlines and make the progress we desired, we knew a change was necessary. The Steier Group stepped in immediately, assessed our status and got our capital campaign back on track. Six months ago, the idea of a capital campaign seemed overwhelming. We needed to raise money for a new facility, but were at a loss of where to start. One of the best decisions we made was to hire the Steier Group. Today we are celebrating our success and making construction plans. Our campaign was goal-driven, and results-oriented, with a momentum we never thought possible. Partnering with the Steier Group allowed us to achieve success that would have been impossible on our own or with any other firm. The campaign was the first for our staff so it was imperative that we select the right firm to guide us. Our decision to partner with the Steier Group was absolutely the best choice our leadership could make. Time and again, the Steier Group proved they were the right fit to manage our campaign. I was inexperienced in fundraising, especially at this level; the training and advice I received from members of the Steier Group helped me immensely and contributed directly to our success. Without question, it was a team effort. In addition to our full-time manager, we received outstanding support from the firm’s executive team, grant writer, graphic artist, communication specialist, and planned giving expert. Not only did we receive a commitment of resources, the Steier Group also showed a true loyalty to St. Pius X High School.

From the first contact we had with the Steier Group to the final handshake and “good-bye”, the members of the Steier Group team exuded both excellence and expertise in everything they did. They were passionate in their service to us and worked tirelessly to accomplish the goals set before them. We are in a much stronger development position having worked with them and they are still available to us if we have any questions or needs. They are not only very talented but they genuinely care about their clients.